This post is part of our Practical Cucumber series.

Nobody knows how to organize cucumber features and steps. Unlike our beloved web framework, there are not enforced convention. Every project has it’s own conventions–that is, if it has conventions at all. Here is a pattern that works for us.

Steps should be reusable. We’ve found the best way to keep track of them is to group them by the primary model they affect. Some steps may affect multiple models, but usually there is an obvious choice. For example, the following step could either go in provider_steps.rb or license_steps.rb.

While it is related to the Provider model, there are two good reasons it should go in license_steps.rb

Grouping steps by model makes them easy to find and encourages

Brilliant, huh? It seems obvious, but we often see apps where the features are grouped by model. There will be one massive appointment.feature model that has completely unrelated scenarios. Put each feature in it’s own file. It’s up to you to decide what a “feature” is.

Here is one subdirectory of the project that I took the above example from:

Which brings up another point: don’t be afraid to put features in subdirectories. For any large app, it’s almost essential. Cucumber gets confused when you do this, but you can fix that by adding the following to the options in cucumber.yml:

What do you do to organize your cucumber features and steps?

This post is part of our Practical Cucumber series. 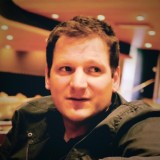